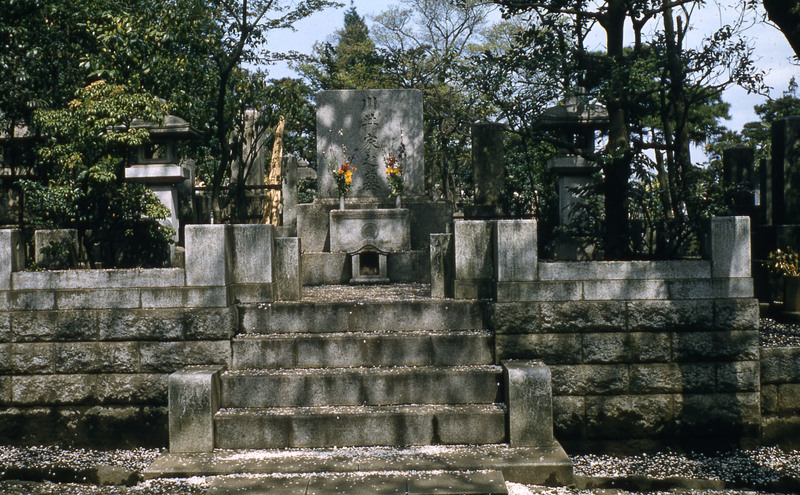 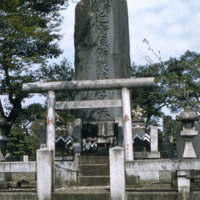 This memorial commemorates the lives lost when the Hitachi Maru sank. 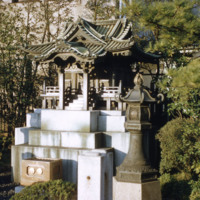 A stone shrine with a stone lantern to one side 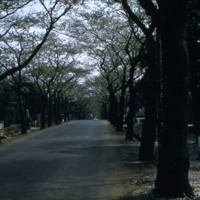 A road running through a graveyard, most likely the Aoyama Rei-en in Tokyo. 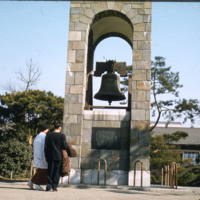 The replica of the Liberty Bell was given by the United States. 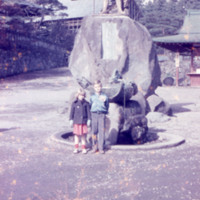 Atop a large inscribed stone is a copper statue of Shodo Shonin, who founded the earliest shrines and temples at Nikko in the 8th century. 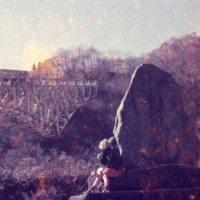 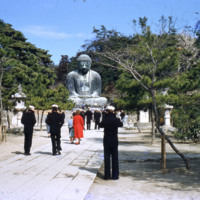 Men in US Navy uniforms stand in front of the great Buddha statue at Kamakura. 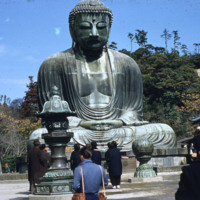 Various people gaze at the great Buddha at Kamakura (the Kamakura Daibutsu).

Hitachi Maru Monument - The Hitachi Maru was placed into service with the NYK (Nippon Yusen Kaisha) steamship line on its European routes for almost six years. In February, 1904, the ship was requisitioned by the Imperial Japanese Army to transport men and war materials from Japan to ports in Korea and Manchuria in support of the Russo-Japanese War. While transporting 1,238 people, including 727 men of the 1st Reserve Regiment of the Imperial Guard of Japan and 359 men from the Imperial Japanese Army 10th Division, she was shelled and sunk by the Imperial Russian Navy armored cruiser Gromoboi in the southern Korean Strait between the Japanese mainland and Tsushima in the "Hitachi Maru Incident." The Hitachi Maru Memorial was made for those lost with the ship.

Hibiya Park - Hibiya Park is dotted with mementos from around the globe: a piece of stone money from Yap Island, a block of gneiss from Antarctica, a Viking stone epitaph, and a statue of Remus and Romulus donated by Italy in the 1930s, to name a few. There is a hillock in Hibiya Park crowned with a Liberty Bell, donated by the United States in 1952. Hibiya Park now has two large Western-style flower gardens. There are several restaurants in the park, and a few stores selling refreshments. Gingko Biloba trees are also abundant in the park, including one that is over 400 years old.

Japanese Graves/Memorials - A typical Japanese grave is usually a family grave consisting of a stone monument, with a place for flowers, incense, and water in front of the monument and a chamber or crypt underneath for the ashes. The date of the erection of the grave and the name of the person who purchased it may be engraved on the side of the monument. The names of the deceased are often engraved on the front of the monument, but may also be on the left side, or on a separate stone in front of the grave. Nowadays, the high prices of funeral plots have led to a new service of Grave Apartments, where a locker-sized grave can be purchased for much less. Some of these may even include a touch screen showing a picture of the deceased, messages, a family tree, and other information. Due to the cost of land, a temple in Tokyo opened a graveyard in floors 3 to 8 of a nine story building, where the lower floors are for funeral ceremonies.