When John Sullivan was still a young boy in grade school, he walked down to what was then an airfield in Kenosha, Wisconsin. That piece of land not far from Lake Michigan belonged to Hart Smith, one of Kenosha's first aviators. Smith was working on his airplane inside of his barn – a former cavalry horse barn – when he spied Sullivan and asked the boy to hand him a can of paint. Sullivan helped him work on his plane, a Curtiss Jenny, for the rest of the afternoon. That fall, Smith took the young boy for a ride in the aircraft. During an interview, Mr. Sullivan recalled, "It was my introduction to airplanes and I never got over it." In this interview, John Sullivan discusses how he got interested in flying, learning to fly and buying his first aircraft, women in aviation, and his time managing the Horlick Racine Airport. In 2009, Mr. Sullivan donated his collection of over 400 photographs, newspaper clippings, and aviator biographies to UW-Parkside. To view the digital collection see: https://digital.library.wisc.edu/1711.dl/ParksideAviation 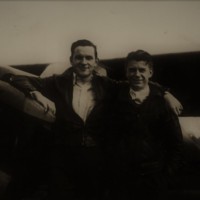 Copy the code below into your web page