History of the Ranger News 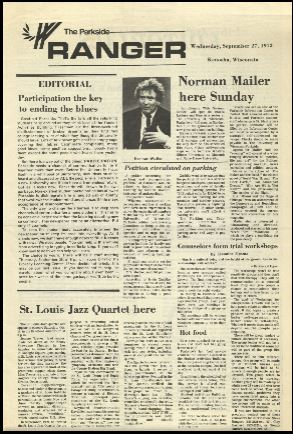 The Ranger News is the University of Wisconsin-Parkside’s student-run newspaper. There were two versions of the student newspaper before The Parkside Ranger, now known as The Ranger News. The Ranger started with a small debt from Parkside’s Newscope, its predecessor, which had inherited a debt from The Parkside Collegian, Parkside’s first student newspaper. The athletic department had published a newsletter for Ranger athletics in May 1971 and May 1972, but these newsletters ceased as soon as The Parkside Ranger was established with the publication of its first issue September 27, 1972. The student staff decided to name the newspaper after the athletic team because they saw a precedence for it and because Parkside was known for the Rangers in its early years. The Ranger News called themselves “First UWP paper that tried to cooperate with students, faculty, staff and administration,” which is why they considered themselves the first successful student newspaper on the Parkside campus. In the Spring of 1980, students were able to work on The Ranger News for college credit for the first time. In the early 2000s, The Ranger News attempted to go completely online, in part due to budgetary and time restrictions. However, this did not last and the paper soon resumed its physical publication in conjunction with an online publication. Now readers can find The Ranger News at their newest website www.TRNonline.org, available since September 2009. They also have a Twitter account, @TheRangerNews, established in April 2011, and a Facebook page. 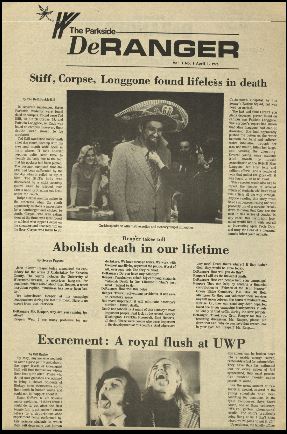 The Ranger News published many offshoots or special editions of the newspaper, including ICON, The DeRanger, and The Stranger. ICON featured art from the Parkside community; The DeRanger featured satirical columns, often with coarse, offensive humor; and The Stranger’s focus was satirical with off-the-wall humor. The Ranger News staff were heavily involved in campus politics and activity. Many staff members on the Ranger, including Kenneth Konkol, became well known around campus for their constant activism and critical articles. Ranger staff members even filed legal complaints in an attempt to affect campus policies and free access to information. In 1974, Ranger contacted the Kenosha District Attorney to prosecute Parkside Activities Board president Barb Burke for violation of the Open Meeting Law, but the case was not taken up because the DA stated that there was not a deliberate attempt to violate the law, others were violating the law, and the law was confusing. Yet this did not stop Ranger staff from keeping their audience informed and continuing to call attention to criticisms of staff, faculty, administrators, students, and other student groups on campus. Ranger staff also heavily lobbied for and drew attention to the lack of student involvement and the need for student government. It is in part due to the criticisms and dedication of the various staff of the Ranger that student government finally formed into its current stable structure (especially compared to the first few years of the combined university), despite the contention often found within the letters to the editor and the editorials. 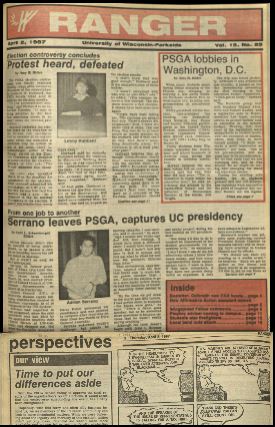 The Ranger News experienced an era of particular renown during the editorship of Jennie Tunkieicz, who was hired by the Milwaukee Sentinel to write feature stories while still a student at Parkside. In 1985, the newspaper was overhauled extensively, leading to multiple awards over the next two years. Jim Neibaur worked on the Ranger staff during this time and often brought in national headlining musicians and celebrities for interviews. The Associated Collegiate Press (ACP) and National Scholastic Press Association (NSPA) awarded The Ranger News with a “First Class” rating for the first time for their papers for the fall 1985 semester. Their first awards were for advertising and editorial cartoons, but the Ranger soon exceeded these awards. They received a “First Class” rating for more and more categories over the next three semesters, with higher scores each time. The ACP and NSPA gave The Ranger News first class ratings for Spring 1986, Fall 1986, and Spring 1987. The Ranger News received awards from the University of Wisconsin-Parkside for Organization of the Year in 2004–05.

← Satire
History of the Ranger News